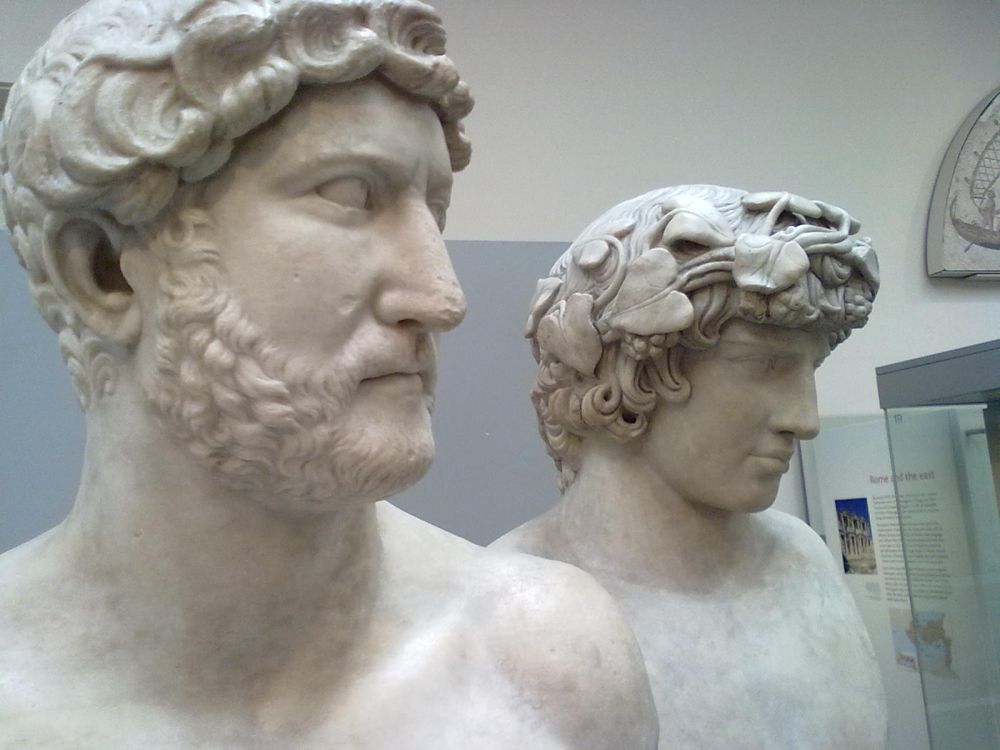 Bust of Hadrian and Antinous at the British Museum.

Coins of Emperor Hadrian (AD117-38) are found throughout the Roman world, this badly corroded one was found by detectorists at Stoke Gabriel. Even though Emperor Hadrian married a woman, he was also publicly known to have engaged in multiple same-sex relationships. These relationships were not uncommon in ancient Rome, men were free to choose sexual partners of any gender on the condition they were the ‘active partner’ in the encounter.

In more modern terms Hadrian was likely bisexual, which was very common in ancient Rome, yet had a preference for same sex relationships. The most famous of which was his relationship with Antinous. Upon returning from his trip to Londinium in AD 122 with his entourage of young men, many of whom he was likely intimate with, Hadrian met a young Grecian man renowned for his beauty called Antinous. Hadrian became enamoured with him and invited Antinous to join his tour of the Empire, an action coupled with his shameless public shows of adoration that made Hadrian stand out in a uniquely queer way from the other emperors of ancient Rome.

Their relationship lasted for 8 years until the untimely demise of Antinous who drowned in the river Nile in AD 130. Heartbroken, Hadrian mourned for Antinous emotionally and very publicly, rather than privately as was custom for Emperors to behave upon the death of a spouse or loved one and was often seen weeping for him “like a woman”. Hadrian proceeded to flood the Roman Empire with imagery and iconography of Antinous, dedicating shrines and deifying him in the same fashion as the Roman Gods. He also named a new city Antinopolis in Egypt in his honour, something Emperors only did when glorifying and memorialising the most important people in their lives.