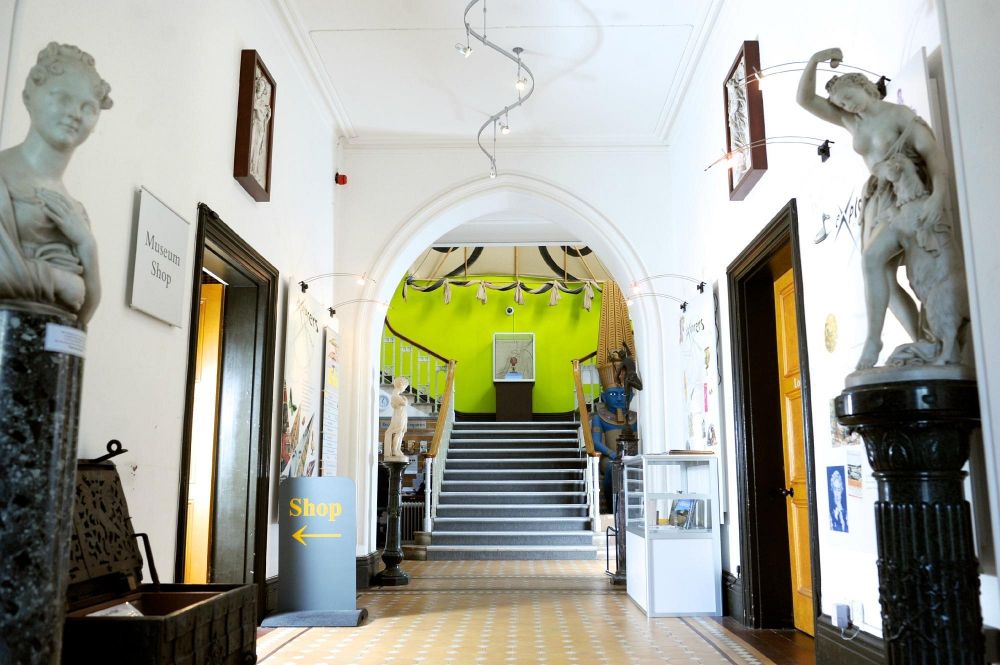 Portrait of Elizabeth Rowe in Carrara marble by Lorenzo Bartolini

Inside the Museum's front doors is a beautiful Carrara marble half-length bust of Elizabeth Williams Johnson who married James John Rowe in Marylebone, London on the 9th September 1823. Her husband became the rector of St Mary Arches in Exeter in the 1840s. This sculpture is unsigned and until December 2021 we knew nothing about its maker.

Bartolini was born near Prato, Tuscany. After studying at the Florentine Academy of Fine Arts he gained a reputation as a modeler in alabaster. He went to Paris in 1797, where he studied painting and afterward sculpture. The bas-relief Cleobis and Biton, with which he won the second prize of the Academy in 1803, established his fame as a sculptor and gained for him a number of influential patrons including Napoleon Bonaparte.

The discovery of a Bartolini in the entrance hall of the Museum is quite a find. He is regarded as one of the most important early 19th-century sculptors and this is a quite fine example of his work.

Find out more in the article below.

Opposite Bartolini's half-length bust is another Carrara marble statue of Esmeralda a fictional character in Victor Hugo's 1831 novel The Hunchback of Notre-Dame (or Notre Dame de Paris). She is a French Roma girl who constantly attracts men with her seductive dances, and is often seen with her clever goat Djali.

This sculpture is by another Italian artist Pasquale Romanelli (1812 - 1887) who was the apprentice of Lorenzo Bartolini. The coincidence of these two sculptures (only a few feet apart) is purely accidental, but we have both the master and his apprentice together in our entrance.

Our Esmeralda was sculpted in 1863, at this time Romanelli opened an art gallery on the Lungarno Acciaiuoli where completed works could be sold directly to the public. Mrs Oswold Smith of Paignton gifted the sculpture to the Museum in 1947 but we don't know how she acquired it or how long it might have been in her possession.

It is an exception that a regional Museum like Torquay has the works of two great Florentine artists in our entrance hall.

Find out more in the article below.

The Museum's donations box is a magnificent 'Armada' chest, a name applied to heavily reinforced strongboxes from around the 16th century. Many have tales of being acquired from the shipwrecks from Spanish Armada fleet. In reality, few have any such provenance.

In 2022 the Museum was contacted by the descendants of a Captain Morton Jack who lived locally to the Museum in Devon. Morton Jack moved to Devon from Ireland and brought the chest with him. He donated it to the Museum in 1954 with a story about its provenance. "This chest was originally in the possession of the O'Flaherty family of Iar Connaught in Ireland. At the time of the Spanish Armada (1588) the chief of the clan was Murrogh-na-Taugh who was active in the rounding up Spaniards ship-wrecked on the coast of West Connaught after the Armada. Since this chest is passably of Flemish origin and is of 16th-century date or earlier this history tends to show that it was a treasure chest from one of the wrecked ships."

It appears that the chest is almost certainly from the Armada ship called the Falcon Blanco Mediano, which was wrecked in late 1588 on the west coast of Ireland, off Connemara. At this time 26 ships of the Spanish Armada were wrecked off the coast of Ireland but only six have ever been found.

Read the full story below.

These figures occupied positions on the walls of the dining hall of Waddeton Court, Stoke Gabriel, Devonshire, and were found covered with white-wash in a cellar when the ancient manor-house was rebuilt by Henry Studdy about the year 1840. After the sale of the Court in 1915, the owner Colonel R. W. Studdy, J.P., deposited the figures on loan in this Museum and in 1922 they were finally presented to the Torquay Natural History Society by Miss V. E. Wills.

The female figures represent the three Theological Virtues Faith, Hope and Charity and three of the four Cardinal Virtues Fortitude, Temperance and Prudence.

The description and identification of the figures has been fully considered in Devon and Cornwall Notes and Queries, Vol. XII, pages 18 - 21 and 120 - 127.