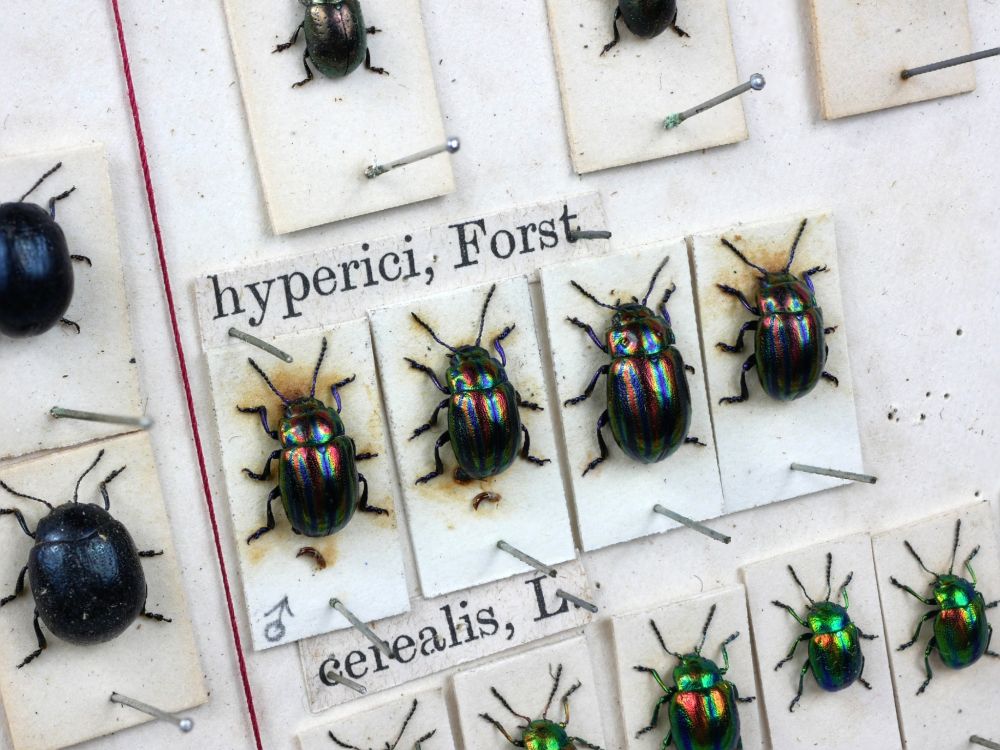 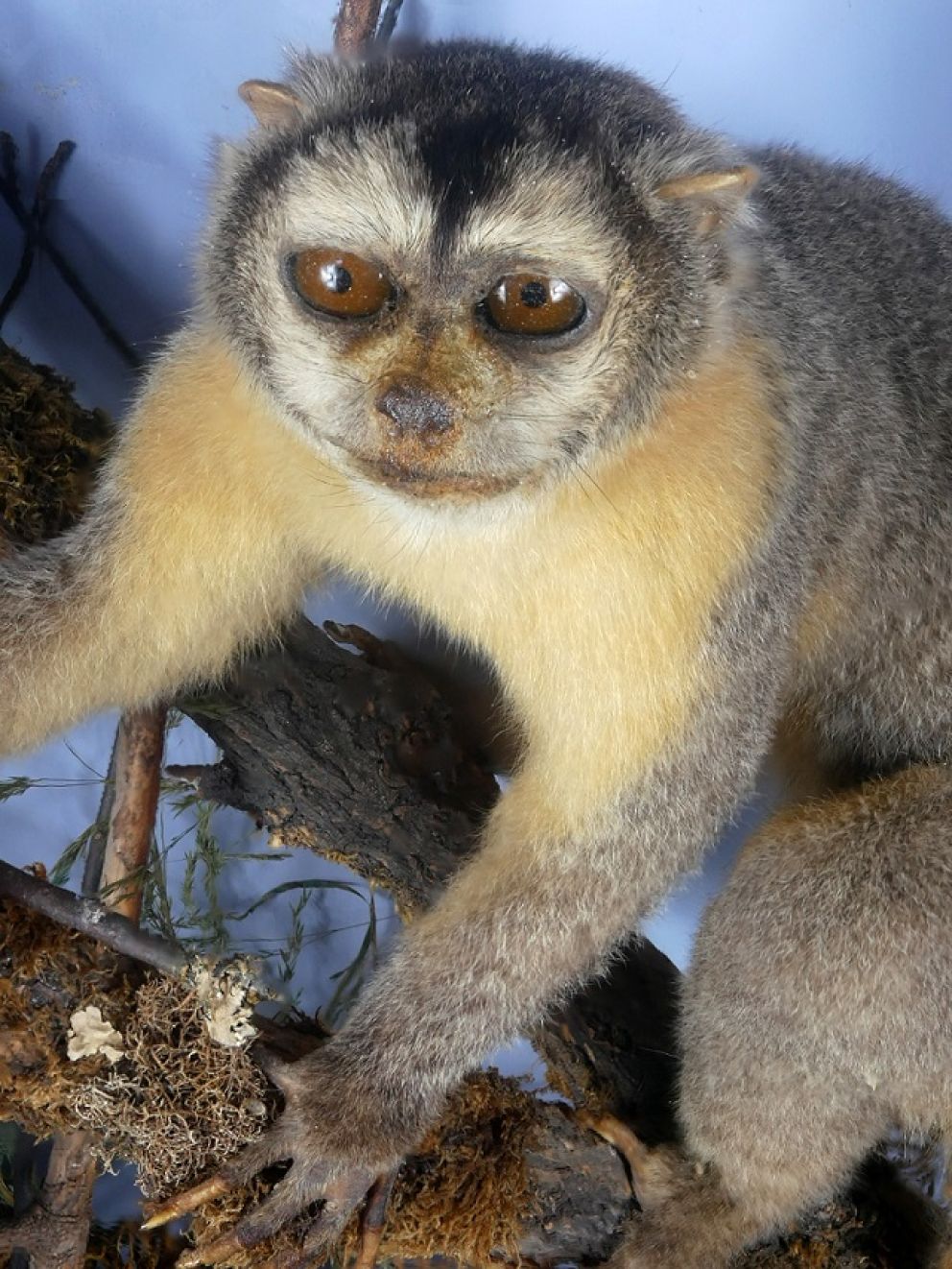 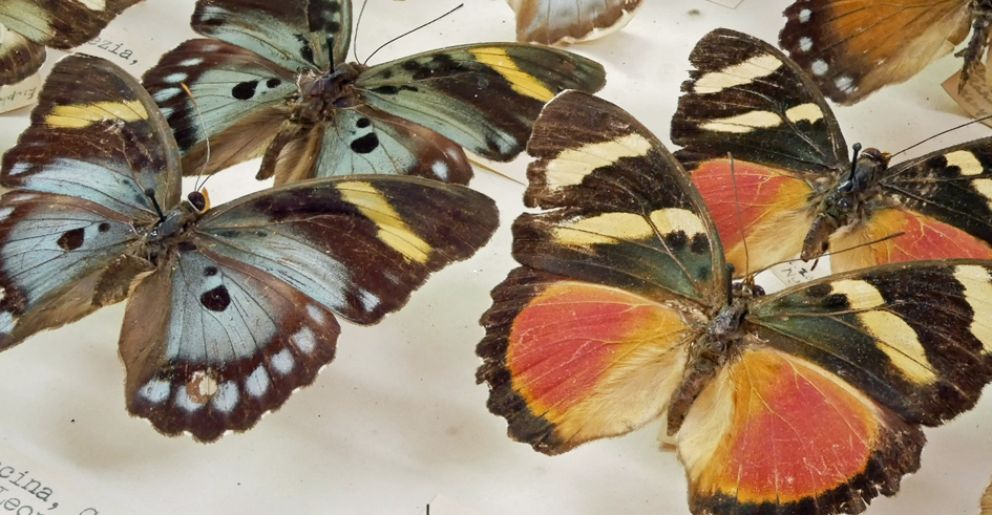 The Hebbert Collection of Tropical Butterflies

Housed in 64 collectors’ cabinets, this is a treasure trove of insect life. It includes collections of British flies, moths and butterflies, tropical beetles, and some spectacular Baltic amber with inclusions of ants, wasps and bugs. Consisting of over 110,000 specimens from all over the world and gathered over the past 150 years, the collections include the Ashe Collection of British beetles, the Gough Collection from Europe and Trinidad, and the Hebbert Collection of tropical butterflies.

Collector Amelia Griffiths was a dedicated beachcomber and during her life she found and preserved nearly 250 different species from local beaches. A pioneer, she was one of the first women to be recognised for their contribution to science. Her beautiful bound albums of seaweeds and algae are held in the stores, alongside other collections of marine plants, making up an important and well-documented collection of over 16,000 specimens.

Our stores hold some 20,000 shells, which are in the process of being catalogued, and include many tropical as well as local specimens. The largest collection of tropical shells and corals was left to the Museum by A.H. Ogilvie a previous curator and benefactor of the Museum who is remembered through the naming of the Ogilvie store.

Most species of British birds are represented in the ornithological collections preserved here, in the shape of 500 mounted specimens and hundreds of birds’ eggs. Gulls and local marine birds feature heavily, but the collections also include more exotic specimens like a Bearded Vulture and African Cape Vulture.

The Museum holds many British species of mammals and reptiles, and a large collection of skeletal material, including skulls of tigers, leopards, bears and more domestic animals. Exotic species are also represented, and include a duck billed platypus, Indian pangolin, and slender Loris, as well as the now rare British species such as red squirrel and Scottish wildcat.

Our geological material consists of approximately 6,000 samples in two major collections. The most interesting of these are the collections of father and son, R.N. Worth and R.H. Worth. R.H. Worth had varied interests but is best remembered as an expert author and recorder of most aspects of Dartmoor. ‘Worth’s Dartmoor’ was compiled from many articles he wrote for the Devonshire Association, on subjects as wide ranging as barrows and climate. His geological collection consists of many specimens from the Moors and from all over the local area as well as British and international samples. The Museum also holds a photographic archive and exposure records of R.H. Worth’s along with a temporary exhibition in store entitled, ‘Handsford Worth’s Images of Dartmoor.’ This collection includes some of the first colour photographic slides taken of the Moor.

Our mineralogy collection comprises over 3,000 mineral specimens from all over the world and includes material from R.N. Worth and A.H. Ogilvie. Perhaps the most famous pieces are the specimens of Torquay gold – this is dendritic gold from the Devonian limestone of Hope’s Nose, Torquay – a Site of Special Scientific Interest (SSSI). The specimens were presented by Professor W.T. Gordon, of Kings College, London, in 1922. He discovered the gold while taking a party of students to Hope’s Nose to study limestone faults.