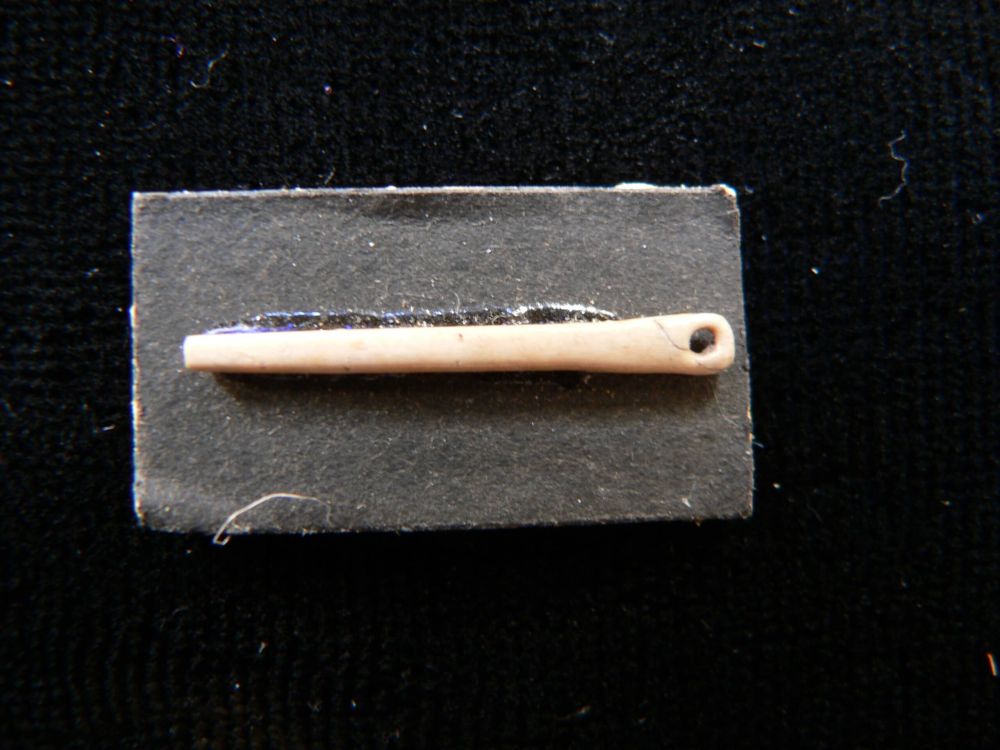 William Pengelly is synonymous with Torquay Museum, having helped found the institution in 1874 and its earlier incarnation as Torquay Natural History Society in 1844.

He also led pioneering excavations at Kents Cavern between 1865 and 1880. About a year in to digging he unearthed an ancient bird bone needle in the Vestibule Chamber. The bone needle was partially covered by a stalagmite and contains a slight fracture in the eye of the needle. Though recorded in 1866 it was not recognised until 1868 when the partial stalagmite piece that was attached fell off in its storage box. Its history reveals quite a mystery… You can see it on display in our Ancestors Gallery.

It was discovered in perfect condition and because of its obvious rarity was quite a talking point wherever Pengelly presented it. It may be as old as 13,000 years making it an extremely important piece of primitive technology both archeologically and historically. In a sartorial sense the tiny needle reflects fine and intricate craftsmanship perhaps even an ability to waterproof clothing and insulate against extremes of temperature. It helped illustrate that the earliest Humans could evidently move considerable distances unconstrained by climate.

The more modern-day story adds another layer to its intrigue. It may easily have been destroyed by a local aristocrat and lost to archaeology forever. The needle is tiny measuring about 2cm long. It was clearly used for fine work and not merely to crudely patch skins together. It may even hint towards an early example of primitive fashion and intricate stitching design. This was not lost on Pengelly.

On one occasion he was invited to show it off at a dinner party. Unbeknownst to Pengelly an influential aristocrat, socialite and social commentator Lord Lytton was about to cross his path. Probably best known for coining the phrase “The great unwashed”, he was quite the character by all accounts.  As his daughter and biographer Hester Pengelly recollects:

“When curiosity had been exhausted, and the needle was again safely in his pocket, his hostess came up suddenly, with, Oh, Mr. Pengelly, would you let me have the bone needle for a few minutes to show to Lord Lytton, who has just arrived. With characteristic confidence and good nature, Pengelly gave his jewel into the lady's hands. In the course of ten minutes it was restored to him, torn from the card on which it had been gummed down, threaded through the card, pin-wise, and the eye broken off and missing.”*

Consequently Pengelly took the advice of his wife and asked the head-chambermaid to search for the missing eye of the needle once the guests had left. Surprisingly she managed to find the tiny missing fragment and was rewarded with a half-sovereign for her diligence.

It was glued back together and remains one of the most important discoveries from Kent's Cavern. It could have been lost forever if it had remained a needle without an eyelet.

*Quote from: “A Memoir of William Pengelly, of Torquay, F.R.S., Geologist. Edited by his Daughter Hester Pengelly (1897).