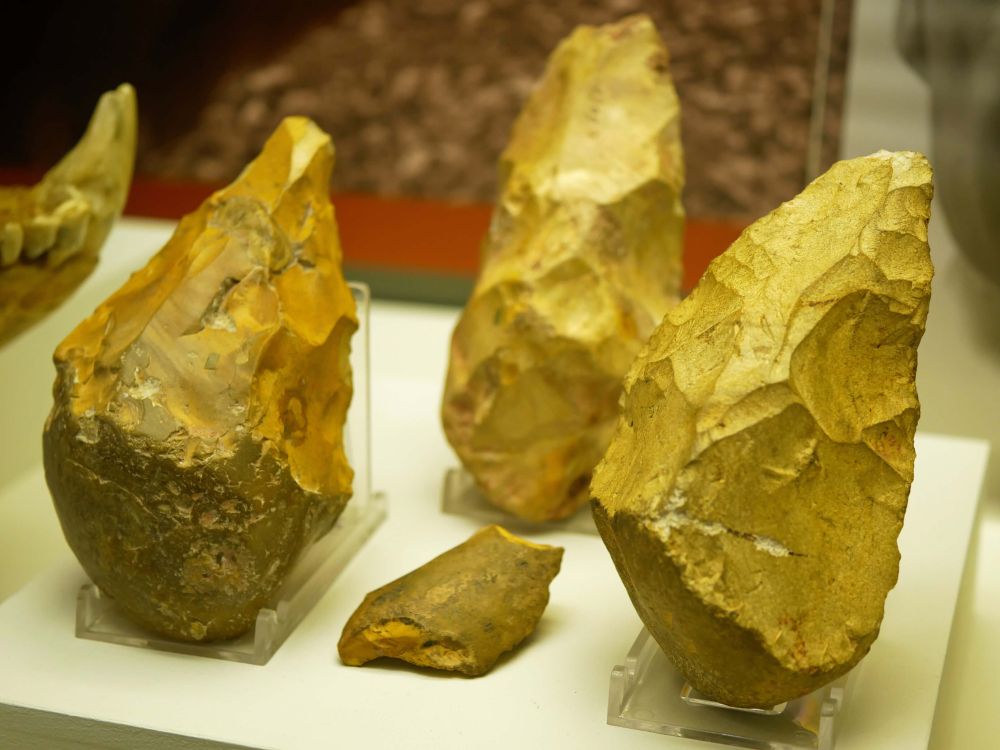 Are These Britain’s Oldest Handaxes?

Among the many objects cared for by Torquay Museum are artefacts found at the nearby site of Kent’s Cavern. The cave system contains layers of sediment that include the remains of human activity stretching back thousands of years: to the Romans, Neolithic farming people, and even before the last ice age, a period known to archaeologists as the Palaeolithic (old stone age).

During the 1870s, William Pengelly and a team of local excavators systematically dug up these sediments by candlelight, discovering many bones of now-extinct animals like scimitar-toothed cats and cave bear, in association with unmistakeably human-made stone tools. This was proof of mankind’s presence in deep geological time. These artefacts include a group of large cutting tools used in butchery that archaeologists confusingly call handaxes.

Handaxes are the iconic artefact of the Acheulean stone tool industry, made and used by ancient humans for close to a million years. While handaxes conform to a basic shape, each is unique in exact form. Nonetheless, during the British Palaeolithic several shapes occur frequently at sites.

Due to Britain’s changing status as an island or peninsula in the deep past, many groups of ancient humans came and went before the last ice age. During cold periods when much of northern Europe was covered by ice sheets, Britain was uninhabited. Handaxe-making groups occupied Britain during several of the intervening warm periods. Recent research has shown that during each occupation, there was a preference for a particular shape when making their handaxes, with preferences akin to the popular fashion of today: oval handaxes were all the rage in one warm period, whilst in a later period pointed shapes were the talk of the town.

In the beginning, handaxe using groups spread across Europe rapidly, bringing with them new technologies like clothing, hunting weapons and stone tools like handaxes, as well as less tangible social developments affecting their way of life. These technological and social innovations are thought to have allowed these ancient humans to confidently adapt to the environments they encountered and endure the harsh climate of ancient Britain. Yet the earliest securely-dated handaxe sites in Britain are 500,000 years old, roughly 100,000 years younger than the earliest sites in northern France.

Using the knowledge of handaxe fashions established in Britain’s handaxe record, and a 3-D laser scanner, it seems this mysterious gap is being filled. The handaxes in Torquay Museum from Kent’s Cavern are much older than most of the handaxes in the UK. 450,000 years ago, a great ice sheet covered most of Britain. The ice-free south didn’t escape the cold and was a freezing arctic desert. During this time, the handaxes left by a group of ancient humans became worked into sediment which accumulated in Kent’s Cavern.

Results from my research suggest that the handaxes found in Kent’s Cavern were likely lying at the surface for much longer than originally thought. Comparison with handaxes from other sites older than 450,000 years ago suggests they were made by a group in Britain 600,000 years ago, meaning they reflect the earliest occupation of handaxe groups in Britain. The handaxes from Kent’s Cavern held by the Museum therefore date back to first arrival of handaxe groups in Britain, at over half a million years old, they provide a link to the wild, cold world inhabited by some of the earliest Britons.

These handaxes are currently on display in the Ancestors Gallery.