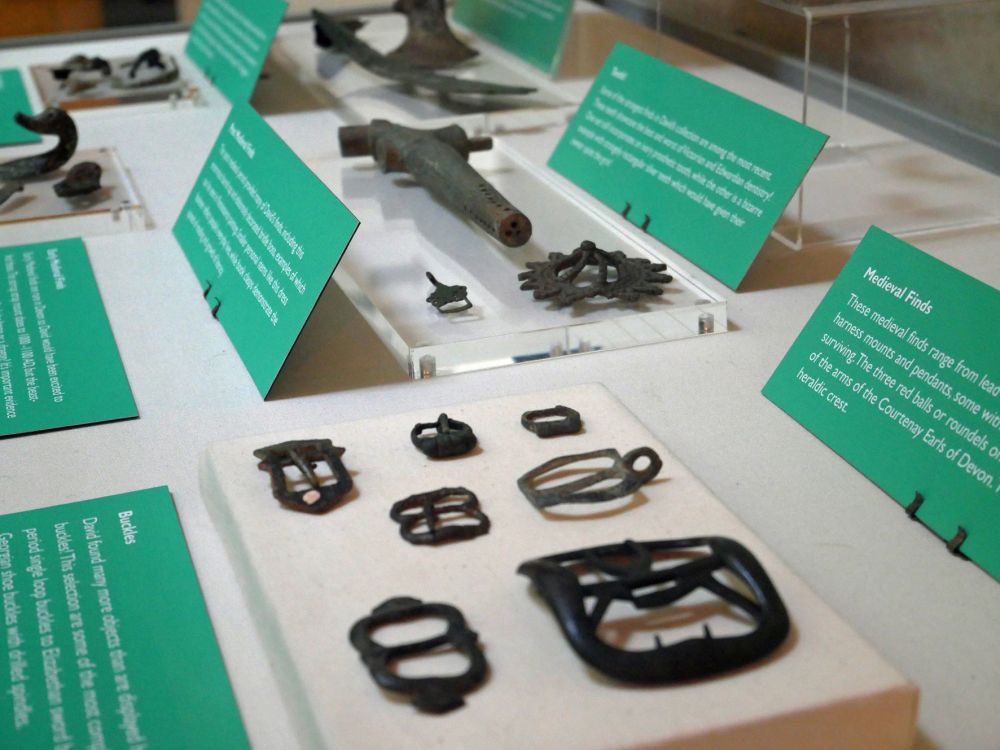 In October last year the Devon and Somerset Finds Liaison Officer, Dr Lucy Shipley, arrived at the Museum with a quite extraordinary collection of finds.

There were boxes and collector’s cabinets overflowing with small metal items, buttons, buckles, coins and decorative pieces of metalwork spanning thousands of years of British history. The collection was the lifetime’s work of one detectorist: David Martin. The BBC BAFTA award winning comedy series Detectorists has elevated the hobby of metal detecting in the public consciousness. The show follows the lives of two hobbyists Andy (played by the show’s creator Mackenzie Crook, himself a keen detectorist) and Lance, members of the fictional Danebury Metal Detecting Club. This gentle comedy makes fun of obsessive hobbyists in general but what it very accurately portrays is the absolute passion the characters have for history and the preservation of details from the past. It is this passion that makes the characters so endearing. David Martin had this passion.

He was a lifelong detectorist, starting out in the 1970s just searching local beaches, but within a couple of years had joined the Torbay Metal Detecting Club. He was a member of the club right up until his death in 2021. David’s life was his meets with the club and the friends he made within the hobby. The majority of David’s early finds are from the Newton Abbot and Torbay area, before he expanded his horizons to Devon, Somerset and Cornwall. He won many trophies at Torbay with his finds and was even featured in Treasure Hunting Magazine in 1989.

Metal detecting is a lifestyle and requires special dedication both in braving the elements and building knowledge. “Without fail, no matter how bad the weather, David would be out detecting covered in mud and soaked through” recalls his sister Jill Perry. The Mid Devon Club of which he was also a member fondly remember his vast knowledge on finds and coins, he would investigate and document everything he found. Responsible detectorists fill a vital role in discovering new archaeological sites which can transform our views of the past. When they record their finds they can also contribute not only to our understanding of the local area, but to huge international debates such as the role and nature of Roman coinage across the Empire.

David already had finds on display in the Royal Cornwall Museum in Truro where he discovered a hoard of 9 Bronze Age Palstaves in 2000. Following his death, his sister has kindly donated the bulk of his finds to Torquay Museum, a collection of over 300 artefacts. Many were found locally but a few are from further afield. We now have the privileged task of documenting this incredible collection. Lucy Shipley visited the Museum again to use her specialist finds knowledge to help the Museum understand the assemblage. The range of artefacts included, from Bronze Age metalwork to Victorian dental plates, really underlines the variety of detecting finds in Devon and the South West and their potential for developing new ideas about the region’s past. A selection of the finds are now on display in the Museum’s entrance hall for a limited time, these include Roman brooches, buckles, prehistoric objects and an exceptional early medieval vessel mount in the shape of a beast’s head.