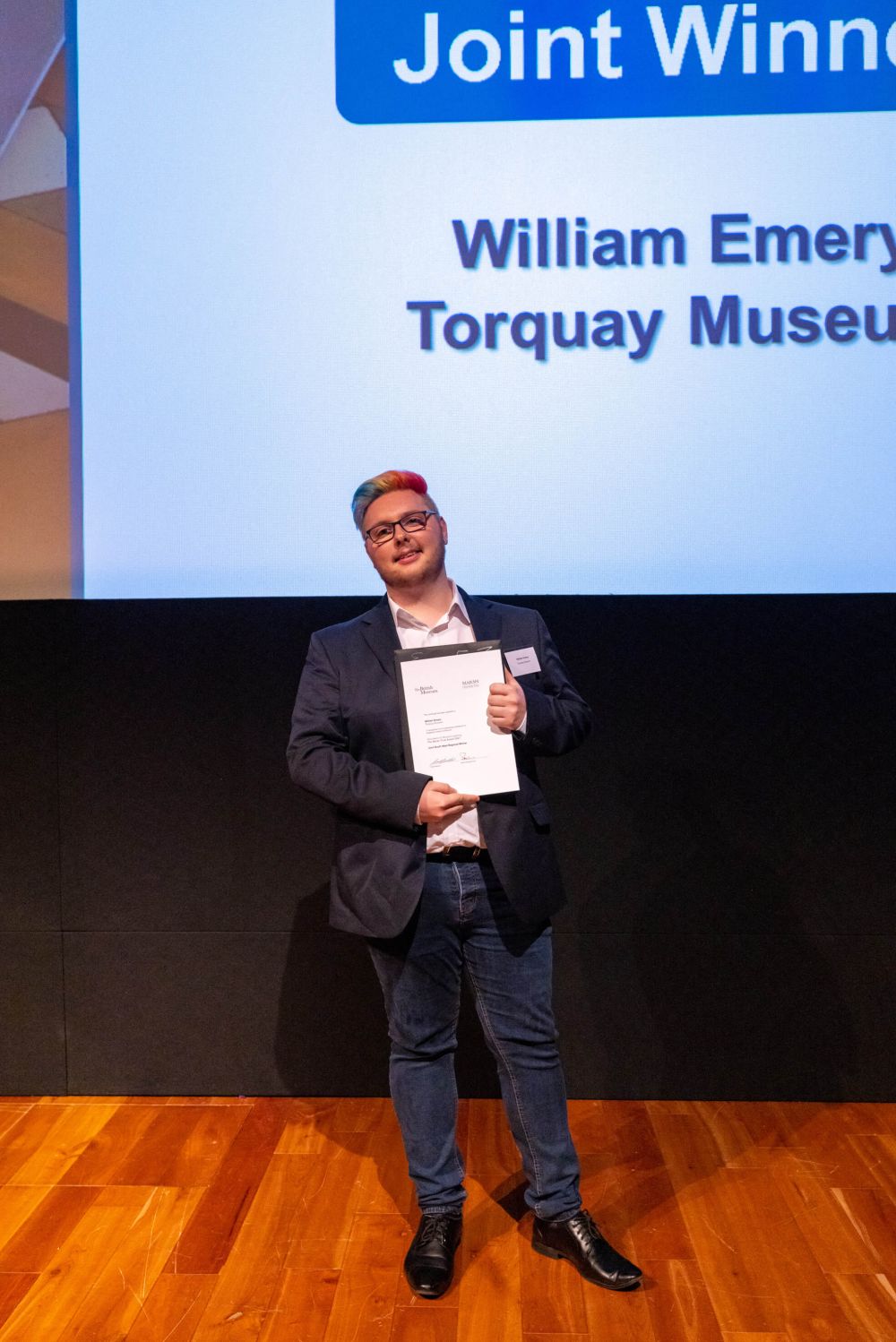 Will Emery of Torquay Museum has won a prestigious award for his transformative engagement work for the Michelangelo Trail: A Delve into LGBTQ+ Histories.

He was presented with the award for the South West region, won jointly with a Museum on Jersey, at a ceremony at the British Museum.

The British Museum and the Marsh Charitable Trust have been working in partnership for the fourteenth year of the ‘Volunteers for Museum Learning’ award which recognises the hugely important contribution that volunteers make to help museums engage with their visitors.

Celebrating the time volunteers have given in the previous year is particularly pertinent as teams and individuals helped their museums and heritage sites recover from the pandemic. The ‘Volunteers for Museum Learning’ award forms part of a programme of awards presented by the Marsh Charitable Trust in the fields of science, ecology, conservation, heritage, literature and volunteering. Each one of these awards recognises individuals and organisations who devote their lives to improving the world today and in the future.

The Marsh Awards programme is managed in association with key partners including the Zoological Society of London, English Heritage, Barnardo’s, the Refugee Council and the British Museum. The aim of the ‘Volunteers for Museum Learning’ award is to recognise those volunteers who engage directly with museum visitors in any capacity.

Will Emery was the primary volunteer involved with our project The Michelangelo Trail: A Delve into LGBTQ+ Histories funded by the South West Museum Development Recovery Fund to discover LGBTQ+ histories throughout Torquay Museum’s collections and galleries. This digital and physical trail is a permanent addition to the Museum’s galleries hosted through the Museum’s website.

Will volunteered for the project after seeing a call for volunteers on Facebook to interpret LGBTQ+ hidden histories. He joined the team, initially for 3 months, to search the collections and research content on a variety of items. He was given the difficult task of searching for at least one object with a hidden story in each of the Museum’s galleries.

There were 90 applications from across the UK, some from groups of volunteers and some from individuals. The judges consisted of staff from the Marsh Trust, staff and volunteers from the British Museum and a representative from the Royal Horticultural Society.

The 2021 Marsh Volunteer Awards were announced by Muriel Gray, Deputy Chair of the Trustees at the British Museum she said, “Museums across the UK are grateful for the contribution of volunteers to ensure they reach and inspire as many people as possible. Volunteers are also an important part of the British Museum community. The efforts of volunteers up and down the country in 2021 are an inspiration as they gave their time throughout a challenging period, helping museums and heritage sites with their recovery from the impacts of the pandemic. These awards recognise the commitment and enthusiasm of volunteers in museums and we are very grateful to the Marsh Charitable Trust for acknowledging this work.”

The winners each received a cash prize of £500, donated by the Marsh Charitable Trust. The one overall national winner The Cambrian Heritage Railway Museum, Shropshire received an additional £2,000.