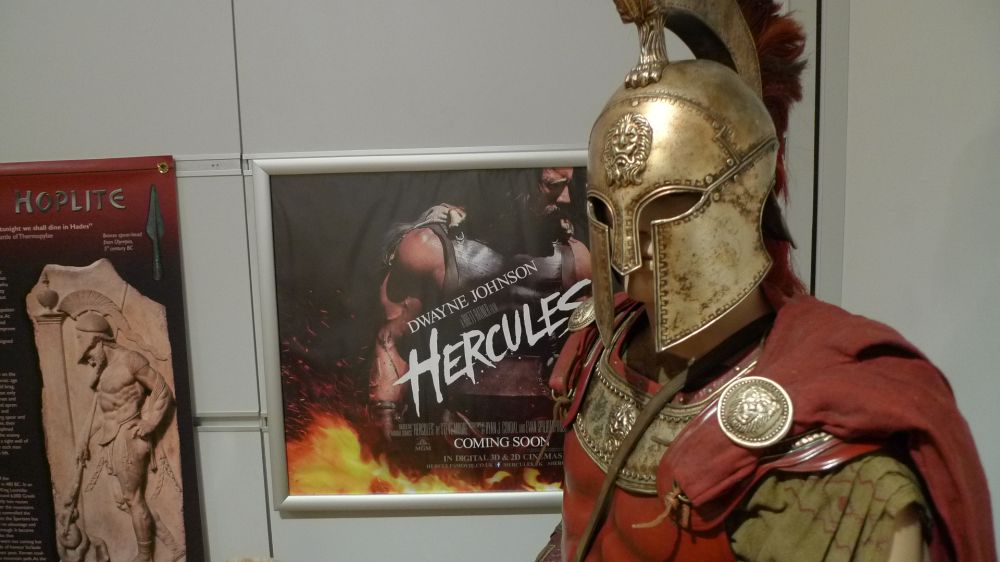 Warriors of the Ancient World: Epic Movie Arms and Armour is a visually stunning, touring exhibition of props and costumes used in epic historical blockbuster movies. The exhibition includes a selection of full warrior costumes and armour containing ‘screen used’ props from some of the biggest sword and sandal epic films of recent years, including; Gladiator, Troy, Hercules, Alexander, Centurion, The Eagle, King Arthur, and the hit TV series Spartacus. Much of the movie armour and costumes are historically based with many representing highly accurate reconstructions of warrior equipment and weapons from the ancient world.

Highlights of the exhibition include; Oscar winning costumes from the multi-award winning Gladiator (2000) displayed with the interior hangings from General Maximus’ campaign tent. There is a full suit of Sarmatian armour used in the climactic battle scenes of King Arthur (2004), created by legendary screen armour Terry English who also worked on Excalibur (1981) and Aliens (1986). Visitors will be able to see the armour and costume of Spartacus worn by Liam McIntyre from the Starz series Spartacus Vengeance (2012).

Uniquely, this exhibition also offers a range of interactive replica handling armour and movie props for visitors to experience, ranging from a gladiator’s helmet to a hoplite’s shield from Alexander (2004). Visitors can get a taste of what it would have been like to put on armour from the ancient world.